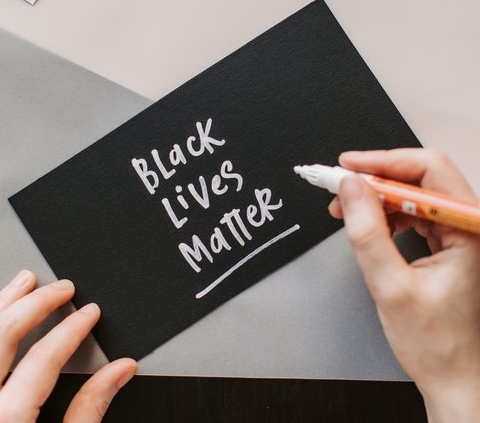 It’s taken me too long to post about the horrible racial violence that is occurring and has been occurring for hundreds of years. As a privileged White woman how can I speak to racial injustice? More honestly, and shamefully, I’ve been afraid to say the wrong thing.

I encourage you, my friends who are not a BIPOC, to take action that really supports the dismantling of racism and stops violence against Black men, women and children and all those who are racialized and marginalized.

I want to be an effective non-optical ally, not just someone who tweets a hashtag. I have a lot to learn. I will make mistakes. I had to look up what ‘non-optical ally’ even meant. When a friend used the word, I pretended to know what it meant. I didn’t ask her because I was too embarrassed, and didn’t want to look ignorant even though I was. I searched for the term and read about it. I’m beginning to understand how I might do my small part.

How can I go beyond the surface gestures of support? How can I contribute in a meaningful, long-term way? Through action, educating myself and changing my behavior, I can help move the needle. This is what I’ve started with. Maybe you’ll be inspired to do something of the same.

1.Put your money Where Your Mouth Is:

I researched and chose to donate to a local charity organization. I wanted it to have an impact close to home. It’s not much but it’s a start. I chose M.O.S.A.I.C.. They serve immigrant, refugee, migrant and mainstream communities in British Columbia, Canada.

“If people,” as a good friend of mine said (looking at me in that particularly wonderful way of hers to mean ‘yes, you Victoria’), “really want to mean what they say, then put your money where your mouth is!” We both agreed not everyone is in the financial situation to do this, but for those of us who can, let’s do it.

2. Listen to Your Black Friends, Indigenous Friends and Friends of Colour

Seek out your BIPOC friends. Ask questions and listen. If you don’t have any friends who are different than you, that should tell you something right there. It’s embarrassing for me to admit, but I have only a handful of BIPOC friends. That in and of itself was a wake-up call for me.

I reached out to my wonderful friend, Terry Bankston, who has a management group, works for American Airlines and lives in the States. After asking how he was doing in light of the horrible current events, I asked him another question. What’s the number one thing privileged white people could do to help eradicate the social injustice and violence facing BIPOC communities? These were his profound, thought-provoking suggestions:

Terry said “Don’t get up everyday and try to eradicate racism, sexism and classism. Get up everyday and make sure they don’t eradicate you! Communicate to me as you would like me to communicate to you. All Black people aren’t your friends and all White people aren’t your enemies.” I loved that one and despite my best intentions let out a laugh when I heard it. He continued, “you may not be the best, but you can always do your best.”

Terry explained to me, “these are some of the foundational blocks I have built my life and thought process around. Over the past 3+ years the high beam strobe light has been on what has been The Fundamental Issue in this country for over 300+ years: POWER!

Those with the perception that they have Power are not in the streets protesting, not grandstanding. They are using these times to let others scream and yell instead of sitting down and communicating. Communicating to others the way they would like to be communicated to. History, life experiences, and listening, seriously listening on both sides of the table needs to happen.

We can’t stay in the past and expect to get to the future. The more we talk about the past instead of spending our time planning next future moves, where do you think the focus will be?

It’s going to take all people to change the power structure in the country. ALL PEOPLE: Ethnicity; Disabilities; Class. And this will gradually change the world.”

I was surprised by his reaction to protests and asked if he felt protests are unhelpful?

“Protests can be helpful,” he explained, “if they are done with a plan. Those yelling and screaming may not know how to sit down and communicate. To build a plan with people that may not look or act alike.”

My friend, a Black man who lives in the southern United States willingly, clearly and lovingly responded to my questions. His answers gave me more than a little pause for thought. I am grateful for Terry, his wisdom and am still reflecting on what he shared.

I started educating myself by reading and listening. I began with this short piece by Mireille Cassandra Harper shared on twitter:

4. Make Changes in How You Do Your Job or Business

I’m looking at where I have been racist or haven’t been inclusive in my position and business. For example, I have a Mental Health Tips and Resource guide. How many of those resources speak to the experiences of BIPOC? Embarrassingly, none. Yes, the resources I list are for everyone. But it’s helpful to list services that are culturally sensitive. I looked for some credible, well-respected resources and added them to bring diversity into the guide. It’s an on-going process. There’s more I want to include.

Racism and racial violence don’t end when the news cameras stop filming.  It’s important to keep up support after the news cycles have died down, which is so often my habit. That has got to stop. I will make mistakes in my language, my actions, but I’m educating myself and welcome opportunities for my own ignorance and racism to be confronted. Where am I being complicit in racism? Where are my implicit biases? I’m working to uncover them and change them.

Note: I have chosen to follow the style guidelines of The Center for the Study of Social Policy for the capitalization of “Black” and “White”. Read their article Recognizing Race in Language: Why We Capitalize “Black” and “White”

6 Ways to Increase Tolerance for Uncertainty

‘Pluto the Talking Dog’ is good for your mental health!
Scroll to top